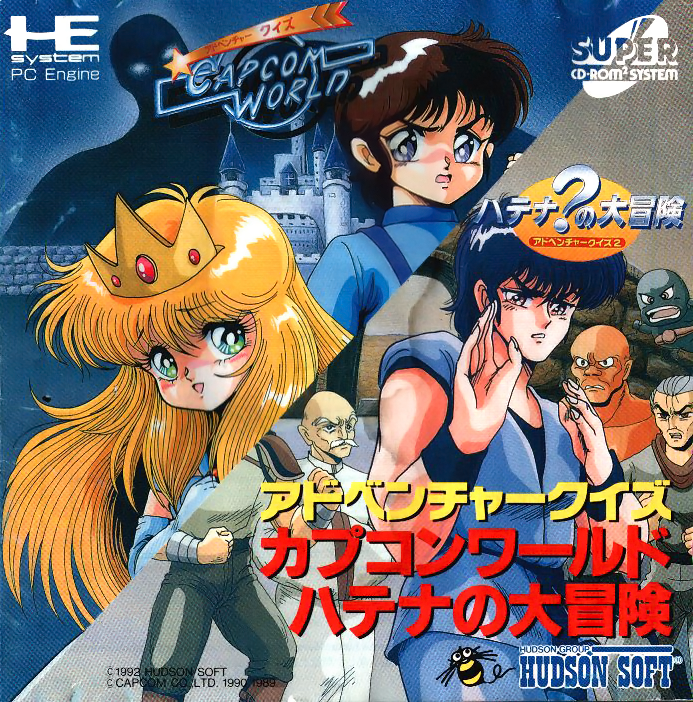 Adventure Quiz is a compilation of two games previously released on the arcades, Capcom World and Hatena? no Daiboken.

Both games play very similarly: the player has to roll dice in order to navigate his/her alter ego on a board with medieval/fantasy backgrounds. Depending on the result, the character advances a certain amount of squares, which lead to various quiz challenges. The player has to answer a series of questions within a time limit, choosing the right answer among the several (usually four) available ones. Two-player gameplay is also possible.

Upon reaching the final square of a "world", the player has to face a "boss enemy" (usually a character from popular games by Capcom, such as Side Arms, Forgotten Worlds, etc.). The boss offers the player a choice of several available topics for the decisive quiz. "Defeating" the boss leads the player into a new worlds with its own structure, etc.

The themes of the questions are varied, ranging from history and geography to Japanese popular culture and very specific themes (such as bicycles).

Hatena? no Daiboken is a follow-up to Capcom World, offering a few enhancements: multiple paths through some worlds, special squares that lead to new challenges (such as a quiz with only three possible answers), etc.